As you may recall, my hubby Blaine has joined the blogging team. Here is the thrilling conclusion to the journey into making our own bacon.

So you’ve spent the better part of a week staring into your refrigerator and obsessing over what you have done wrong to ruin your hard won pork belly. You have flipped it every other day just like you were supposed to, but you think there should be more liquid rendering from the Bacon. You have contemplated adding more curing solution. You have poked and prodded it daily to see if it was firming up. You have talked about it endlessly at work. You have asked your wife’s opinion on the matter ad nauseum. You have typed the word Bacon into every search engine on the internet. You can’t sleep for dreaming about Bacon.

You have resigned yourself to the idea that you might actually have to throw this thing in the trash. You imagine opening up the package and being overtaken by the rank and putrid smell of rotting pork.  A week of your life down the toilet. Bitter disappointment that just won’t flush away, leaving you no choice but to plunge your very soul in a poor attempt to unclog the shame. So, what do you do? You go to work, call your wife, and make her do it.  And, lo and behold, your fears were unfounded. The report is good. Smells like Bacon. Looks like Bacon. But it isn’t Bacon…yet.

No, my friends, Bacon must be smoked. Until then it is simply cured pork belly, and that will not do. There is something magical about a cut of pork bathing in smoke for hours on end. The smoke adds it’s own layer of flavor that compliments and accentuates the pork. It is an accessory not to be overlooked. Sure, you may look great in your little black dress, but you wouldn’t dream of going out without the proper necklace and earrings to go with it, would you? Smoke is the “bling” that pork wears to the party, and each type of wood brings it’s own flavor. Apple, Cherry, or Peach wood will impart a nice fruity note. Very tasteful and sublime. But I’m looking for that Flava Flave, Mister T kind of over-gold that only Hickory can impart. Not so much an accessory as a statement.

So, on to the smoker it goes for a few hours until it reaches 150 degrees internal. What? You don’t have a smoker? If you have a charcoal grill, then you can make a small bed of coals on one side, add some wood  chips, and put the Bacon on the opposite side and cover. Finish in the oven if you have to, but get some smoke into that thing first! Then pull it off and let it cool, and cross your fingers. Putting it into the freezer for about half an hour helps with the slicing. Use your sharpest knife and cut it as thinly as you can muster. This will still be thick sliced in comparison to store bought Bacon, but that’s nothing to worry about.

Into the frying pan it goes, and the anticipation reaches a fever pitch.

The smell is wonderful. The sizzle and crack of the fat rendering is like a symphony. Drain it on some paper towels and prepare yourself to fall in love at first bite. Your first impression will be of smoke. The Hickory is the opening act, and it fills your nasal cavity with it’s wonderful perfume, hearkening back to smokehouses of old, to the frontier land of hard work and toil, to traditions not lost but taken for granted. The second act is the surprising meatiness of the Bacon. This stuff has substance, a toothiness not found in crumbly, grocery store Bacon. And the flavor is pure pork, almost reminiscent of a country ham, stronger and much more defined than any Bacon you’ve had before. Then comes the finish. That sweet maple finish on your tongue that leaves you begging for an encore, filling you with a desire that can only be soothed by another bite of the perfect Bacon. And you’re hooked. You start the process all over again, praying that this first batch will last until your second one is finished. It’s going to be a long week.

Copyright Your Business LLC. 2021 - All Rights Reserved
Back To Top

This website uses cookies to improve your experience while you navigate through the website. Out of these, the cookies that are categorized as necessary are stored on your browser as they are essential for the working of basic functionalities of the website. We also use third-party cookies that help us analyze and understand how you use this website. These cookies will be stored in your browser only with your consent. You also have the option to opt-out of these cookies. But opting out of some of these cookies may affect your browsing experience.
Necessary Always Enabled

Any cookies that may not be particularly necessary for the website to function and is used specifically to collect user personal data via analytics, ads, other embedded contents are termed as non-necessary cookies. It is mandatory to procure user consent prior to running these cookies on your website.

SAVE & ACCEPT
Subscribe to Two Lucky Spoons email newsletter and get our Skillet Dinners eBook.. for FREE! 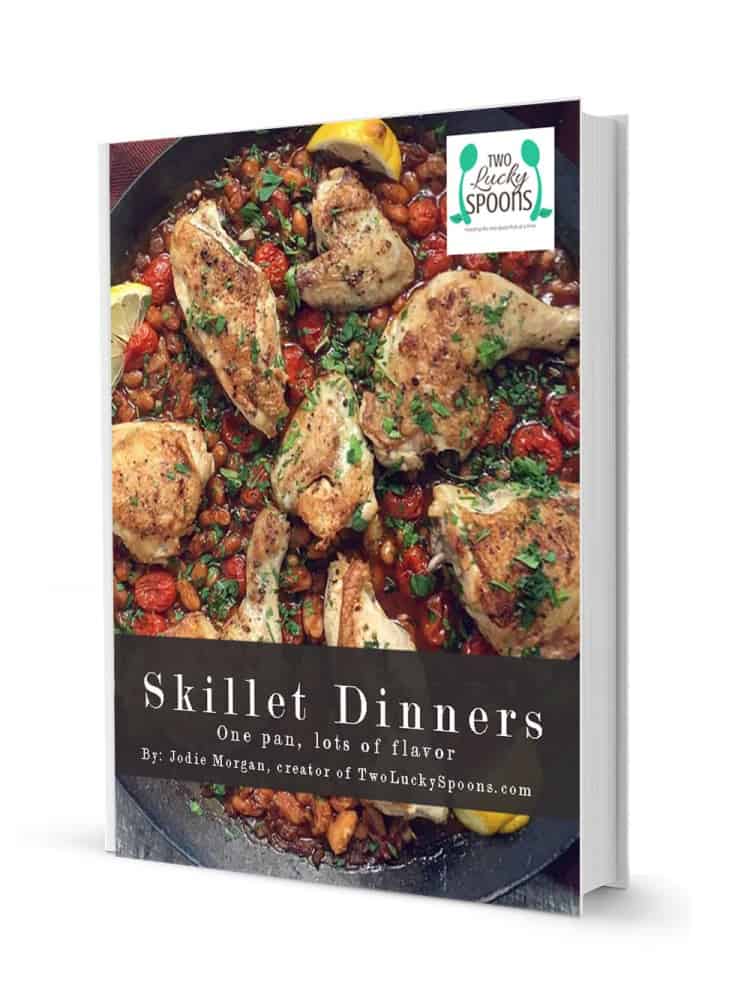